A STORY TO THE STAGE

I love hearing individuals success stories, especially their story to the stage.  Below is one from my client Grace, who competed for the first time in May. What I love about her story is not just accomplishing a goal, but overcoming obstacles and learning so much along the way. Additionally, the legacy that her father inspired her to carry on is awesome.  I’ll let her tell it.

My Story to the Stage

God blessed me with a lot of things, but athleticism and a speedy metabolism didn’t quite make the list. Needless to say, sports never really worked out for me. I was a dancer, a cheerleader and the occasional runner. From the time I was little I struggled with my weight and became cautious of what I was eating. To make matters worse, my friends were all the a-team athletes who could eat pizza and popcorn for dinner and maintain their perfectly trim frames. I hated my body.

Fast forward to my senior year of high school, I had had enough. So, I downloaded MyFitnessPal and the app told me lose 2 pounds a week I should eat 1,200 calories. Along with only eating 1,200 calories a day and dance practice, I would run miles on miles every week. I lost 25 pounds in 3 months, everyone told me I looked great, and even though I liked what I saw in the mirror, I was not in a good place mentally. I was obsessive, I weighed myself multiple times a day, and I would beat myself up for every ounce that the scale went up. It was a constant chase to maintain.
With obsession and overtraining comes injury. After one of my typical runs I began feeling a lot of pain in my hip, it hurt to walk, sit, stand, lay down, everything. No relief in physical therapy eventually lead to an MRI, where they discovered that I had hip impingement, my hip bone was turned inward, and I had scoliosis. My doctor scheduled a cortisone shot, and said plainly, “you’re just never going to be able to be a runner.” He had no idea how those words affected my fragile, obsessive, mind. Running had become my sanity, the only way I understood how to exercise, and how to stay thin.

My Dad was a competitive bodybuilder in the 90’s, so the concept of lifting was nothing new. But, I didn’t want to become “bulky,” (insert eyeroll). In what I would have called at the time desperation, I asked my Dad to teach me how to lift.
Between my Dad and the internet, I soon became comfortable lifting in the gym, and I was tracking my macros instead of just calories. I learned to have a healthy relationship with food again, and I put the scale away. I lifted because I loved it, I did cardio because I wanted to, not because I had to. My mindset through my college years shifted, I knew my body could look better but making memories with my friends was more important at the time.

I graduated college in May of 2018 and started my full-time job 3 days later, which was a huge adjustment for me. My job didn’t feel fulfilling, I no longer had a goal or a degree to work towards, I was slumped. I had always said I wanted to compete someday, just like my Dad. So, after a rough week at work in October I began my search for a coach. Before I knew it, I was on my journey to the stage with Ryan Irwin.

32 weeks later I hit the stage and competed in the NANBF Natural Iowa show. That day brought a lot of emotion for me, I had never felt prouder of myself. I knew that I wasn’t where I needed to be to place against the other girls, but I was okay with that. From where Ryan and I started those 32 weeks ago, we delivered my best. When the time is right, I’ll be back on stage, and my best will be better. 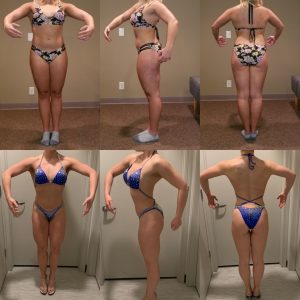