Laura Hilkemann won her IPE pro card at the 2018 NANBF Natural Iowa in Figure. Her story is a great example of why so many people enjoy natural competitions. You can see Laura’s live FB video after her big win here: https://www.facebook.com/naturaliowa/videos/10156341405297418/ In the words of Paul Harvey, below is the “rest of the story” to the stage: 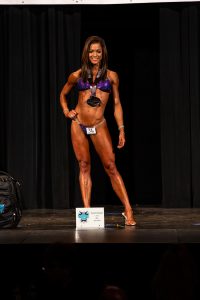 I decided to compete back in October 2015 at GONC in Omaha, Nebraska not fully knowing what the sport entailed. A good friend of mine was competing at the time and suggested that I try it. I immediately fell in love with the sport, competition and the mental and physical aspects of competing. Competing and bodybuilding has given me a sense of accountability, achievement, and strength- both physically and mentally. I have always been very hard on myself and was extremely negative. Competing has taught me to love myself for who I am, has given me confidence in who I am, and encourages me to always go after what I want.

The hardest part of prep is coping with all the mental aspects that it can bring- the questioning of “Am i doing enough? Do I look ‘good’? Am I lean enough? Do I have enough muscle?” The mental questioning can really mess with your emotions. However, as time went on, I realized that the NANBF organization is SURROUNDED by positive, encouraging, and strong people who ALWAYS want to help and motivate you to do well. So, though that part of prep is hard, it easily turns into one of the BEST parts of prep and competing within the organization.

Knowing that I share a passion with so many others is uplifting and fun to share stories, ideas, workouts and experiences with- especially within a drug free organization where everyone is literally busting their ass to reach their own personal goals, rather than competing against each other. Sharing a stage doesn’t feel like a competition of who is better than who, it’s commemorating success to every competitor and being able to share that same sense of pride and work ethic.

Turning pro has really opened my eyes to this idea of friendship and teamwork, rather than competitions. At a amateur level, judges would often say “you present the best package on this stage now, but when you’re on the pro stage, EVERYONE looks good and shows their passion.” This is so true and when competing on the pro stage, I felt so honored to share a stage with females with the same passion and motivation.

My biggest takeaway for anyone who is interested in bodybuilding and competing is to do it for YOU and have FUN doing it because you’ll soon realize how rewarding it is not only for yourself but others that are watching you and competing with you. It’s easy to be hard on yourself, but it is so much more fun to challenge yourself and make friendships with people who can help make the challenge a little less stressful and completely enjoyable!