Getting Less Done With Multitasking

Getting less done with multitasking

I have a confession to make; I am a recovering multi-taker. “But Irwin, that is a good thing, why are you saying sorry for that??” you say. Read on, what I am about to explain is that trying to do more with less is actually doing less.

At some point in our lives, we realize one of the keys to success, whether professionally, athletically, socially or in many other matters, is getting things done. Shortly thereafter, we decide that the more I get done, the better things are. Next thing you know, creating to-do lists become a more regular ritual than sitting on the toilet and you begin puking out as many tasks as possible, often at times not even fulling chewing, let alone digesting them as you do so. Am I starting to paint the picture? Stay tuned, the picture doesn’t get prettier. You see, while the mindset of massive production looks good on the exterior, it leads us often into multitasking, which as you see is actually counterproductive. 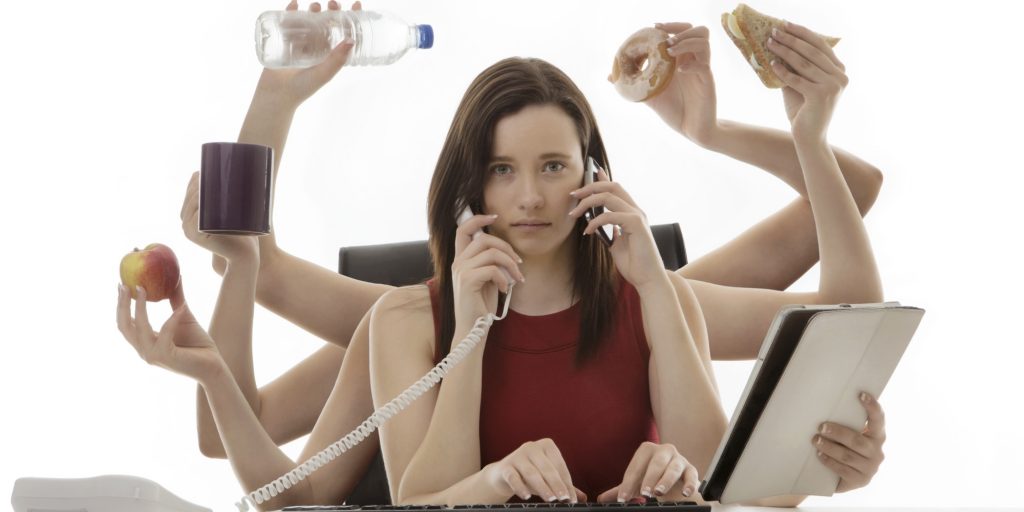 First, let’s define what multitasking is. According to Webster, “multitasking: the performance of multiple skills at one time.” Ohhh, that sounds neat-O, why wouldn’t I want to do that??? Okay, here’s the deal. Everyone has different skills and abilities. Some examples of these include the ability to read well, perhaps the ability to memorize numbers, or the skill of public speaking. Some can write well (not this guy by the way), others still might be handy around the house without much effort. It makes sense that those who have natural talents in a given area are able to accomplish more so they must be prone to multitasking, right?? Not always.

We are all created equal. One of the obvious ways is that we are all created with 24 hour days. I will have another article down the road on how to optimally spend those hours, but right now, we’re focusing in on when you use a portion of those hours to do something productive. Let’s go back to one of the examples above, say someone who has the gift of writing (again, not me). This individual is able to think a single thought, heck, not even finish the thought, and next thing you know she has a beautiful 4 page paper put together. Then let’s say we have another person who rides the struggle bus when it comes to writing. He will spend days on a paper and while the piece will eventually be okay and get the job done, the effort to compose it was very high and difficult.

Now let’s make the first person a multitasker. While she can get these narratives done very well, she also has a constant barrage of other work-related tasks, keeps a very active social media profile, likes to lift weights, is a big fan of live music, likes to day trade, heads a fantasy football league and is in the process of getting a dog. As you can see, PLENTY of things to side track oneself and how on earth to get it all done, how to create 26 hours of work out of 24 available?? Well multitasking of course!! (WRONG).. Our second person, while isn’t a best-selling author, dedicates the time to sit down, get down to business and work on the paper. Can you imagine how long and the quality it would be if he tried to multitask while writing (scary)!!

It is physiologically impossible to multi-think. What I mean by that is when your brain is thinking about a specific task, there is no way for it to think about another. Try it, think about cooking an omelet and what you are going to do tomorrow evening at the same time. Sure, you can go back and forth but can’t do both simultaneously.   This the insanity that we call this multitasking. You see, when you have to alternate thoughts/attention between to subject matters, you lose concentration, which can lead to distraction, errors and inefficiencies. So what happens is while our friend feels like she is being more productive, in actuality, she is being less productive. It is far more effective to prioritize the tasks (based on your ‘whys’) focus on the single task at hand, get it completed, then move on to the next. Not only will this save time but it is almost guaranteed be an increase in quality too.

Okay, so you can see that trying to do more than one thing at once is counterproductive. However, there is another thing that you might not see, which your creative thinking side is. What I mean by that is when you aren’t distracted with multiple tasks constantly going on (or planning what two things you want to try to smash together), you lose out on the time when ideas pop into your head. These are the times when you get creative and think of your next brilliant idea, or your memory works better than normal, recalling something that you need to think about and plan for. Hey, and let’s not even forget about the opportunity to just plain relax and have less stress in your life (lots of health benefits there)!

In closing, don’t multitask, as in the long run, it actually takes more time to do the same tasks as if you took them on one at a time. Additionally, quality suffers when you are going back and forth between the two. Finally, you lose out on your creative thinking side when your brain is constantly occupied with the task scramble you have going on. Prioritize, conquer and be the best you can truly be!