Natural Iowa Competitor Spotlight: Aaron McCarthy
When I met Aaron initially he was competing in his first competition in Missouri.  Immediately I saw he had some great potential and two weeks later, the Kansas resident was in Iowa, winning his IPE pro card at his second competition.  Below is Aaron’s story to the stage and an example of what hard work can do when focused.
Link to Aaron’s stage interview and class highlights: https://youtu.be/gUhvblrBCHs

WHAT MADE YOU DECIDE TO COMPETE? 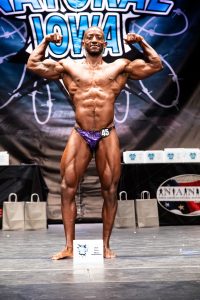 Competing in a bodybuilding show is something that never crossed my mind. I’ve been an on and off gym goer my entire adult life with no real goal, but just going to “maintain”. I met my coach Jesse at our gym and I seen the huge transformation he made and it motivated me and made think about how I’d spent so much time in the gym with no real progress. He told me I should compete and I decided why not set a real goal.

WHAT WAS THE MOST CHALLENGING ASPECT AND OBSTACLES YOU OVERCAME DURING YOUR PREP?

I began prep with no real struggles and quickly lost excess weight and started to see a difference in my body once I changed my diet. The first rough patch I hit was in January when my wife and I contracted Covid-19. Having to quarantine for two weeks was rough on my gym routine and once I came back to the gym my energy was much lower than it had previously been. After powering through February and March I was entering for last push for the Southern States Classic at the end of April. I felt well and placed second in a few different classes. At that point Jesse told me of the Natural Iowa competition that would be happening a few weeks later and I had to decide if I wanted to continue my prep. I was a bit mentally drained but I decided I should push myself for a few more weeks and see if I could bring a better package than I did in my first show. It was a good idea as I met a group of great guys and had a blast in Des Moines and was able to become an IPE Pro.

WHAT DOES IT MEAN TO BE AN IPE DRUG-FREE PRO?

Winning my pro card had been exciting for me and means all of my hard work and sacrifice was valid, but I also feel like I’m just at the beginning and I want to be competitive at the pro level.

WHAT DO YOU HOPE OTHERS CAN TAKE AWAY FROM YOUR STORY?

To anyone who competes or wants to compete I’d say continuously envision your goal and focus on that. There’s plenty of times you don’t want to work out or do that extra cardio or skip out on pizza with friends and family, but having that dedication is what separates you. It’s a tough journey but well worth it when you’re standing on stage with a group of competitors who’ve been through it too. Have fun and just enjoy the journey of learning your body and turning it into a work of art!
For information on next NANBF Natural Iowa competition and how you can maybe find yourself in the Natural Iowa Competitor Spotlight, check out the next upcoming competition here
Tags:
aaron mccarthy
iowa bodybuilding
mens bodybuilding
nanbf
Natural iowa
natural Iowa muscle