David Bryant won his IPE pro card at the 2018 NANBF Natural Iowa in Figure. He did it while experiencing two life events as well! You can see David’s live FB video after his big win here: https://www.facebook.com/naturaliowa/videos/10156340426487418/. In the words of Paul Harvey, below is the “rest of the story” to the stage: 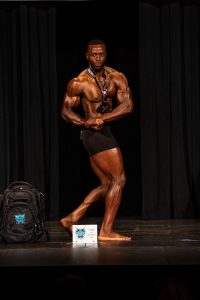 For the past 5 years I have weighed the option to finally competing in a show. As a former athlete I thought it was in my nature to compete but something always made me put it off. Then during my engagement process with my wife we found out we had a little one on the way. That’s when it hit me that with a new child on the way and jumping the broom would really change my time commitments moving forward so decided that the time had to be now. I picked a show a few weeks before the wedding and told myself “-at least I’m going to look awesome on my wedding day!”

There where 2 things that stood out to me personally during prep:

The best part for me was learning the amount of self discipline I had inside. There is enough time in the day, I can go without drinking, I can eat clean, it may not be easy but it can all be done. That’s something I can use in all areas of life. If you want it bad enough you can do it.

It means you are a BEAST! It takes a lot of hard work but the physical and mental reward is worth it.

I hope others can see my story and know that they too can do this. We had the baby in February, wedding in june, and show in May. So while working a full time job I was able to manage all of that, they too can. It wasn’t easy but I got it done, and they can too.